Not an Eating Disorder 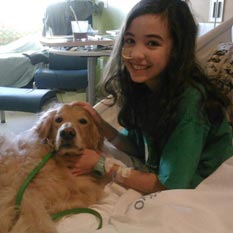 “Monica has always been one of our healthiest kids,” said Nannette, mother of six. “So when she started experiencing stomach pains and severe weight loss after fighting a terrible bout of pneumonia last year, we knew something was wrong.”

Nannette brought Monica to see their gastroenterologist at Phoenix Children’s who sent her to get some blood work. “Monica collapsed during the blood draw and the doctors made the decision to hospitalize her,” remembers Nannette. “That was when we started the long search for a proper diagnosis.”

Nannette and her husband, Ched, were no strangers to Phoenix Children’s, but things were different this time. “This hospitalization was very scary for us,” said Nannette. “With everything we have experienced with Annie, Ched and I consider ourselves experts on spina bifida and all the health issues that come with it. When Monica’s weight dropped dangerously low and began to affect her heart function, we were terrified and did not have the security of experience and knowledge to fall back on. We had no idea what was making our normally very healthy daughter so sick and felt helpless as we saw her wasting away before our eyes.”

“This was the cause of Monica's severe stomach pain, inability to eat and drink, and spiral downward into severe weight loss,” said Nannette. “This condition is very rare and often overlooked as an eating disorder.”

Monica was hospitalized for 15 days, it was during this time she met Synthia Puffenberger, an intern with the Psychology Department at Barrow Neurological Institute at Phoenix Children’s.

Nannette welcomed the doctor’s suggestion to involve psychology and give Monica a thorough evaluation. The nutritionist explained how patients commonly develop a strong fear of eating over time due to the pain and discomfort they experience. Monica also dealt with high anxiety and panic attacks resulting from nausea and a paralyzing fear of vomiting.

When Puffenberger started daily visits with Monica during her in-patient stay, the psychology intern immediately started teaching her vital tools to deal with her anxieties and fears. Monica felt very comfortable with Synthia, and really appreciated her calm and compassionate demeanor. She appreciated how Synthia related to her as a young lady and not a child.

As treatment began, which involved nutrition support through an NG tube with night feeds and also meals and snacks by mouth during the day, Monica quickly realized this was going to be a difficult journey back to health. After so much time being malnourished, Monica’s stomach needed to re-learn how to take on normal amounts of food. This was going to cause a sort of stretching of her stomach and even involve discomfort. Synthia helped Monica understand how she needed to push through the pain and eat in order to get better. Her treatment continued even after discharge, and Monica came home with a Nasojejunal (NJ) Tube that would continue to deliver nightly supplemental nutrition until she reached a healthy and stable weight.

Nannette remembers Monica’s relief when Synthia explained they could continue weekly visits even after discharge from the hospital. “Even at home the anxiety that came with meal times was overwhelming,” Nannette said. She described feeling helpless knowing she could not force her child to eat, and yet breathed a sigh of relief when she realized that Monica would really listen to Synthia’s counsel.

Monica did not return to school during the months of treatment, and continued to thrive and get better with the wonderful encouragement and counseling she received from Synthia. The day finally came when Shauna Rae Schroeder, MD was going to remove the NJ Tube. Monica was grateful that Synthia was present to coach her through the process, and thrilled to hear Dr. Schroeder wanted to empower her by allowing her to pull out the tube on her own!

Monica was already inspired by her little sister’s challenges with spina bifida and the comprehensive medical care she receives at Barrow at Phoenix Children’s. Now her own battle with SMA syndrome, allowed her to experience firsthand the compassionate nurses, experienced doctors and the incredible support from Child Life. Monica and Nannette agree the biggest help was the amazing compassion and counsel she received from the Psychology Department.