Fight to Achieve Your Dreams

Meet Ella one of our incredible Phoenix Children’s Comeback Student Athletes. (Thanks to her parents for sharing her story.) 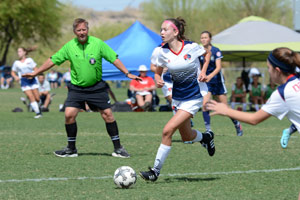 Ella has been a patient with us since she was 7 days old. Before she was born, it was discovered she had bilateral clubfeet. “As soon-to-be first-time parents, we wondered if she would ever be able to walk or run. We wondered if she would need braces on her feet for her lifetime. The thought of her playing sports didn’t even seem like a possibility at that time. We had so many questions,” Ella’s father, Chuck, said.

They immediately made an appointment with our Center for Orthopedics in order to formulate a plan for Ella after her birth. “These doctors were just amazing. They did an amazing job of calming our nerves with their empathy and patience. What an answer to our prayers," Chuck said. "This excellent care continued through Ella’s first years of life and beyond.”

Ella underwent a series of weekly leg casts followed by several years of bilateral foot braces in order to correct her deformity.

“Because of our frequent visits, the Phoenix Children’s doctors and nurses quickly became like family. They treated her with a great deal of compassion and most importantly knew how to make our little girl laugh,” Ella’s mother, Allison, said. "It wasn’t long before Ella was in elementary school and was starting to show interest in sports, especially soccer. “With braces still on her feet, it was just unbelievable to see her out there on the field running and kicking the ball. Just years earlier, we were wondering if she would be able to walk normal. As her love of soccer grew, she began to play competitive and has been on one of the top teams in the state since.”

“This didn’t slow Ella down or crush her amazing spirit. She kept her brave face and contagious positive attitude throughout. Last year during one of these relapses, she ended up needing extensive foot reconstructive surgery. This forced her to miss a big part of the soccer season while she underwent intense rehabilitation," Chuck said. "Her desire to get back on the field kept her focused as she attended physical therapy as much as three times a week for six months. Her amazing doctors and therapists, coupled with her hard work and determination, allowed her to help her team make it to the ‘Girls U14 Arizona State Championship.’ It was such a special feeling for her to step onto that field after all she had been through."

"Phoenix Children’s Hospital has been such an integral part of Ella’s life. Without her amazing doctors, Ella wouldn’t have been able to demonstrate her unbelievable work ethic and perseverance that has resulted in her being the athlete she is today. She dreams of someday playing college soccer. Ella is a perfect example of what can happen if you don’t let obstacles stop you from achieving your dreams. She made a sign that hangs in her room that reads, “God has a purpose for your pain, a reason for your struggle, and a reward for your faithfulness! Trust Him and do not give up,” Chuck said.