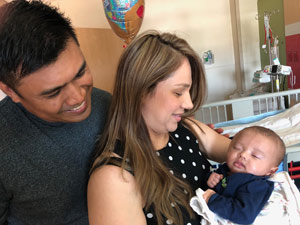 Meet Greyson. He and his family traveled from Ewa Beach on Oahu Island in Hawaii, where he was diagnosed with hemimegalencephaly–a rare neurological disorder where one side of the brain is larger than the other which can lead to seizures/epilepsy. Greyson was having seizures/spasms since birth. Greyson’s mom starting researching infantile spasms and found they can be fatal, so she began intense research for a specialist who treated infantile spasms/seizures. She came across Director of Barrow at Phoenix Children’s and Chief of Pediatric Surgery, P. David Adelson, MD, and emailed him a video of Greyson having a spasm. Dr. Adelson got back to her within 24 hours and called her to say he thought he could help Greyson and they should come to Phoenix Children's Hospital ASAP.

Greyson was admitted to Phoenix Children's June 12 and immediately had an EEG. Not long after, Dr. Adelson performed Greyson’s surgery, a procedure known as a cerebral hemispherectomy where he “shuts off” the right side of Greyson’s brain, which was where all of the seizure activity was coming from, and reroutes all normal brain activity to the left side. Since our brains have so much plasticity when we’re infants, doing this type of surgery at three months of age gives the left side of Greyson’s brain an opportunity to remap and adapt/adopt the right half’s functions.

The surgery took place on a Friday the 13th–which is usually associated with bad luck, but that day will have a completely different meaning now in this family. Greyson will visit Phoenix Children’s again in a few months to make sure the seizures have subsided, but his parents are extremely grateful to everyone who cared for Greyson. In particular, they were especially thankful for our Barrow at Phoenix Children’s folks: Dr. John Kerrigan, Greyson’s neurologist, who always had comforting words and felt like a family member, Diana LaRoque and Barb Disbro for their tireless coordination and Dr. Adelson for performing the delicate surgery. Mom said the overall amount of caring, follow-up and communication at Phoenix Children’s was amazing. All the best, Greyson!