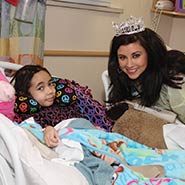 Telling her daughter’s story is still an emotional experience for Heavyn’s mom. Brenda had just arrived in Las Vegas for a short vacation, leaving Heavyn with grandpa for a fun weekend in Colorado. Minutes after checking into her hotel, she answered a call that every mother dreads and struggled to absorb its meaning.

Brenda dropped everything and rushed to Colorado, desperate to be at her daughter’s side. At the hospital, she learned the extent of Heavyn’s injuries. Her broken clavicle and humerus would likely heal without complications. Of greater concern to the doctors was Heavyn’s traumatic brain injury. She hit the ground so hard, her brain was severely swollen; immediate surgery was needed to avoid further damage. Surgeons removed a portion of her skull, to give her swollen brain time to decompress.

“It was pretty clear from the start that she would need a lot of care,” recalls Brenda. “We were looking at multiple surgeries, a long hospital stay, then rehabilitation. I decided we needed to be in our own home in Phoenix, and my other two children needed their mom nearby to help them deal with this family tragedy.”

After she was stabilized, Heavyn was transferred by Air Evac and delivered straight to the Phoenix Children’s Pediatric Intensive Care Unit (PICU), their home for the next several months.

“They were all ready for Heavyn, with all the details on the treatment she received in Colorado,” Brenda says. “It was so reassuring to meet with all the specialists and to know that they were working on a plan for how to help her recover.” One of those specialists was Dr. P. David Adelson, Director of Barrow Neurological Institute at Phoenix Children's. As an international expert in traumatic brain injury, he took the lead on Heavyn’s neurological care. “It was a miracle that Dr. Adelson actually knew the surgeon in Colorado and they had already talked to make sure that everyone at Phoenix Children’s was up to speed on Heavyn’s condition,” says Brenda.

Shortly after her arrival, Dr. Adelson ordered a CAT scan, which showed that Heavyn’s brain was still swollen, pressing against her skull. She required an artificial plate to protect her brain while the swelling reduced.

Brenda counts off the list of the diagnostic studies, procedures, and treatments Heavyn received like a medical expert. Over the months, she became all too familiar with CAT scans, MRIs, GI swallow studies, seizures, kidney failure, hypertension, infection, blood transfusion, and surgeries. Even though she experienced the normal concern of a mom for her child, Brenda held on to the reassurance she felt from everyone involved at Phoenix Children’s.

“Heavyn’s team of doctors, nurses, therapists, teachers – everyone at Phoenix Children’s treated us so well. They showed real concern for Heavyn and for the rest of my family,” Brenda recalls. Dr. Alan Kaplan, a neurologist at Barrow at Phoenix Children’s, developed a special rapport with Heavyn. “He’s awesome. He told me that he was very concerned for Heavyn at first but was watching her progress closely. It made our day to know that he cared so much.”

After three hospital stays totaling more than four months, months of therapy, and countless follow-up appointments, Heavyn is miraculously living a normal life. She likes to play with hair and makeup, dress her Barbies, color, and help mom cook dinner. She’s especially happy to be rid of the helmet that protected her brain for nearly a year and celebrates by wearing beautiful bows in her hair.

Though Heavyn exhibits some weakness on her left side and continues with physical therapy, occupational therapy, and speech training to gain back the skills she lost, Brenda knows, with the help of the entire team at Barrow Neurological Institute at Phoenix Children’s, she’s come a long way from that terrible day in Colorado.

“She’s my miracle. She’s a survivor. She wants to be a cheerleader now and I’m sure she’ll achieve that goal, too.”