From Bad to Worse

No Hope in Sight 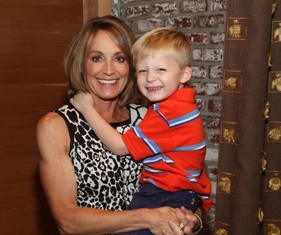 Kaden was first diagnosed at 3 years old with generalized epilepsy, which included myoclonic jerks, absence, drop and tonic-clonic seizures. He has been receiving care at Phoenix Children's from Randa Jarrar, MD since 2011.

Within six months Kaden's seizures had quickly escalated to dozens of seizures everyday, he failed six different medications, endured countless blood draws and was hospitalized with serious side effects.

Kaden also had a G-tube placed because he refused to eat his food which was always laced with medication. After another 24-hour EEG and more testing, Kaden was diagnosed with myoclonic astatic epilepsy, or Doose syndrome, a rare epilepsy usually drug-resistant and can cause cognitive impairment and developmental delays.

"Our once developmentally normal boy was covered in bruises from falling all the time," his mom said, "regressed in motor skills and became delayed in speech. He was spending most of his days in a stupor, drooling on himself. We were truly devastated. Our options and hopes were running out."

Despite all the setbacks, Dr. Jarrar never gave up or settled. She constantly pushed forward and placed Kaden on a special, very strict medical diet, the ketogenic diet. Within a few weeks on the diet, his seizures stopped. Kaden has now been seizure- and medication-free for over a year!

"Dr. Jarrar and her staff have been outstanding in the ongoing battle to keep Kaden on the ketogenic diet and seizure-free." Kaden's mom said. "He is running and jumping again, has regained his speech and is enjoying school with his peers."

"We don't know what tomorrow will bring," said his mom, "but Barrow at Phoenix Children's has given us our son back and peace of mind that we are receiving the best possible care. Thank you Phoenix Children's!"