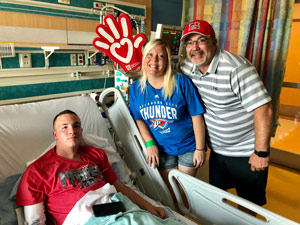 Meet Stetson. He came to us from Oklahoma City, OK. Beginning around 13 years old, Stetson began having stroke-like seizures. He took medications for about four years, but they only left him feeling lethargic and foggy. His neurologist in Oklahoma City, Dr. Amber Stocco, recommended he see Barrow Neurological Institute at Phoenix Children’s Associate Director and Division Chief of Neurology, Angus Wilfong, MD.

The family came in June for consult and Stetson had an EEG. “Dr. Wilfong made us feel very confident and we loved all of Stetson’s other related appointments were here–endocrinology, neurology, neurosurgery consultation, MRI imaging–all in one place,” said Stetson’s father, Danny.

Stetson was diagnosed with hypothalamic hamartoma (HH), a tumor which causes unusual seizures such as blank stares or laughing fits. Stetson’s HH tumor was on the memory part of his brain which made him a him a great candidate for laser ablation surgery. But Stetson also benefited from a brand new technique here at Phoenix Children’s that helps in the targeting phase of the laser ablation procedure called resting state functional MRI (rs-fMRI). Dr. Varina Boerwinkle, medical director of the Barrow at Phoenix Children's dedicated Neurocritical Care Program–the only one of its kind in the Southwest and one of only a handful across the nation–spearheaded rsfMRI technology creating a program called “rs-fMRI Searchlight.”

This new program automates one of the most time-consuming steps of rs-fMRI analysis which typically takes about five hours of a physician’s time. Now, rs-fMRI Searchlight takes just minutes to set up and runs on its own for two hours. Then, physicians can sort the rs-fMRI signals and interpret results in an auto-generated report narrowing this first critical step of whole brain network analysis down to 1-2 hours of physician time. rs-fMRI Searchlight has vastly increased the seizure localization power. We can now fine tune the location down to a subcentimeter focus for laser ablation to cure the epilepsy. This is very powerful especially for kids with epilepsy due to hypothalamic hamartoma, which is impossible to localize seizures by traditional techniques such as EEG, PET, MEG, but the rs-fMRI Searchlight does it.

Stetson was our first patient to utilize this new rs-fMRI technology and we have high hopes for the elimination of Stetson’s seizures. Dr. Wilfong and Director of Barrow at Phoenix Children’s and Chief of Pediatric Surgery, Dr. P. David Adelson, who performed the procedure, are very excited. So was Stetson’s family, “If I could give them more than 10 stars, I would,” exclaimed Danny. “They kept things easy to understand and kept things moving along through all parts of the process.” A junior in high school, Stetson is eager to enlist in the ROTC program and is excited to wean off the medicine and get back to better clarity and memory. Good luck, Stetson!