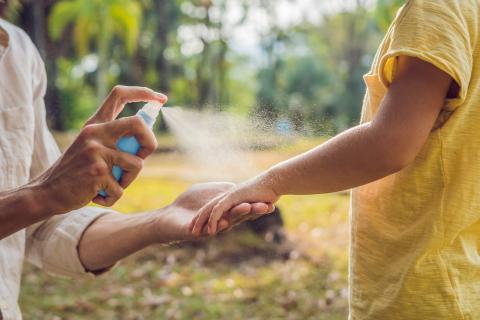 Contrary to popular belief, Arizona does have a big mosquito problem. Our mosquito season usually runs in tandem with the monsoon season, typically June to September. While the monsoons bring a short respite from the summer heat and much needed rain, we unfortunately also see an uptick in mosquito bites.

Not only do mosquitos make our little ones miserable from all those itchy bites, but they carry several diseases like West Nile Virus, Dengue, and Zika. In fact, Maricopa County has had a record high number of cases of West Nile Virus in 2021. Parents now have several options to choose from when picking out a mosquito repellant.

Most traditional mosquito repellents contain either DEET or picaridin as their active ingredient. Both products have undergone extensive testing under the Environmental Protection Agency (EPA) product performance guidelines They have consistently been found to be safe for children and very effective in repelling mosquitos and the diseases they spread. If you want maximum protection against mosquitos and the diseases they carry, these two are your best bet.

The “gold standard” for mosquito repellents since the 1960s has been the compound DEET (known to chemists as N, N-Diethyl-meta-toluamid). It is the most widely sold and the most effective mosquito repellent available. There have been decades worth of research studies showing that DEET is not harmful when used properly. Additionally, there have been numerous studies that demonstrated DEET does not cause cancer. DEET is commercially available in a variety of concentrations ranging from 10% to 99%. Higher concentrations of DEET simply allow the product to last longer on the skin but have no impact on how effective it repels mosquitos. Try to use the lowest concentration of DEET as possible, typically 30% or lower. A 10% concentration typically provides 1-2 hours of protection. When used as directed, any adverse effects like irritation can be avoided.

A newer product, picaridin, has been available in the US since 2005. This synthetic compound mimics a natural compound that Piper plant produces (the same plant that produces table pepper). Picaridin also has an excellent safety and tolerability profile and the EPA has deemed it safe and effective for children. Look for concentrations of 20% which should plenty for 1-2 hours of outdoor play. Some advantages of picaridin over DEET is that it is odorless and non-greasy.

Numerous repellants that utilize essential oils like lemon eucalyptus and citronella are appearing on store shelves over the past few years. It should be noted that essential oils do not undergo the same rigorous EPA testing as they are not officially registered insect repellents. However, the Center of Disease Control (CDC) does endorse lemon eucalyptus as a reasonable alternative. In general, while most essential oil repellants do provide some level of protection, they should be used with the understanding that they are not as effective as traditional repellants.

Lemon eucalyptus oil, not surprisingly, comes from the lemon eucalyptus tree. Of all the essential oil repellants, lemon eucalyptus oil does appear to be the most effective. It works by hiding your own body scents which is what attracts mosquitos. Lemon eucalyptus is approved for ages three years and older. When shopping, look for a concentration of 30% which will provide 1-2 hours of protection. Lemon eucalyptus has a light odor that some may or may not find pleasing. It also can sting if it gets in the eyes, so care is needed when applying.

Although we have long seen citronella candles used to ward off mosquitos, it is now frequently found as the main ingredient in some mosquito repellants. Citronella oil comes from the Cymbopogon grass which at high concentrations does repel mosquitos. The degree of protection that citronella is questionable as some studies show it provides only minimal protection and is not as nearly as effective as DEET or picarian. As such, both the EPA and CDC warn against relying on citronella for protection against some of the mosquito born illness.

There are many more options available but hopefully the above review of the most common repellants will help clear confusion and help you decide which product best suits your family’s needs. Remember, mosquito season usually runs in tandem with monsoon season, so expect mosquito bites until late September. 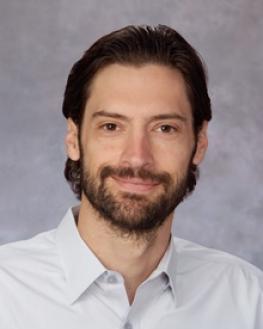 Dr. Gary Kirkilas is a general pediatrician at Phoenix Children’s Hospital with a unique practice. His office is a 35 foot mobile medical unit that travels to various homeless shelters in Phoenix providing free medical care to families as part of Phoenix Children’s Homeless Youth Outreach program in the General Pediatrics Department. He and his lovely wife, Mary (a pediatric emergency doctor), have three wonderful (most of the time) children and two dachshunds. 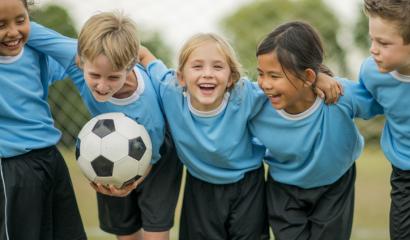 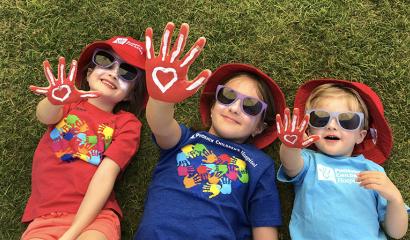