When Krew Dennison was 3 years old, his big sister Sierra, 13, noticed something white in his left eye. She mentioned it to her parents, Jeremy and Jamie, who quickly took action. The Dennisons, who live in Utah, were persistent in getting an answer, traveling to Las Vegas and then Salt Lake City to get the official diagnosis: retinoblastoma. 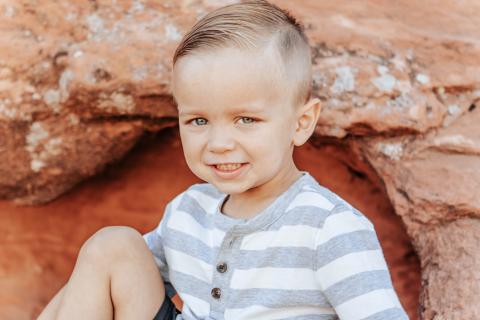 Krew, 3 years of age, today has 20/25 vision in his left eye, thanks to an early diagnosis and treatment.

At the time, there were no specialists in Utah who treated retinoblastoma. After doing some research, the Dennisons chose to bring Krew to Phoenix Children’s for treatment of this fast-growing eye cancer.

“Retinoblastoma has an approximate doubling time of two weeks,” explains Dr. Aparna Ramasubramanian, Krew’s doctor and medical director of Phoenix Children’s Retinoblastoma Program. “Moving quickly once it’s identified, like Jeremy and Jamie did, is important. When we can start treatment two weeks earlier, the tumor is half the size.”

“We classify retinoblastoma tumors from ‘A’ (the smallest) to ‘E’ (the largest and most aggressive),” explains Dr. Abruzzo. “Krew’s tumor was a ‘D,’ meaning it was large in size but still contained within his eye.”

The two got to work quickly to save Krew’s eye and, ultimately, his vision. “They explained to us that many children diagnosed at Krew’s age lose their eye with this size tumor,” says Jeremy, Krew’s dad. “It was a scary diagnosis – Jamie was the calm one, while I was an emotional mess.”

Dr. Rama, one of the few physicians in the U.S. with dual fellowship training in both pediatric ophthalmology and ocular oncology, saw Krew first. Because of his young age, she performed Krew’s eye exam and initial laser and cryotherapy treatment while he was under anesthesia. The laser treatment is used to shrink the tumor, while cryotherapy freezes and directly kills tumor cells. Cryotherapy also enhances the chemotherapy effect on the tumor.

Then, it was Dr. Abruzzo’s turn. He started Krew with intra-arterial chemotherapy – a treatment that delivers concentrated doses of cancer-killing medicine directly to the blood vessel supplying the eye and one that Dr. Abruzzo helped pioneer for retinoblastoma patients.

“Our suites are next door to each other so Krew could quickly go from me to Dr. Abruzzo,” explains Dr. Rama. “The advantage is that our young patients only have to go under anesthesia once for all procedures.”

During Krew’s very first intra-arterial chemotherapy treatment, Dr. Abruzzo noticed a vascular mass in his brain: a second tumor. “We found the mass because of the treatment itself,” says Dr. Abruzzo. “We did more evaluation and believe it’s benign, but we are monitoring it closely.”

Ultimately, Krew had four cycles of this treatment, with his family traveling from Utah to Phoenix every three to four weeks. And his retinoblastoma responded well. The Dennisons were hopeful that Krew had beaten his cancer. But six months after starting treatment – and one month after being cleared – the cancer was back. This time, Dr. Rama gave them a choice: continue with the same treatment or enroll Krew in a clinical trial.

Once again, Jeremy and Jamie had a decision to make … and quickly. In talking to a family friend, they discovered her child also had retinoblastoma and was enrolled in the clinical trial at Phoenix Children’s. The trial meant placing a small device on the surface of Krew’s eye to release chemotherapy slowly over six weeks – and Phoenix Children’s is the only hospital in the country where it’s offered. After discussing it with their friend and hearing their experience, the Dennisons decided to enroll Krew in the trial, too.

The clinical trial also meant traveling to Phoenix every two weeks for two months. A prospect that was made easier with the help of Kim Winfrey, Phoenix Children’s retinoblastoma coordinator. She helped connect Jeremy and Jamie with Miracle Flight and the Ronald McDonald House.

“Miracle Flight has flown us to all of Krew’s appointments,” says Jamie. “And having a place to stay in Phoenix was one less thing to worry about. That support made a big difference to our family.” 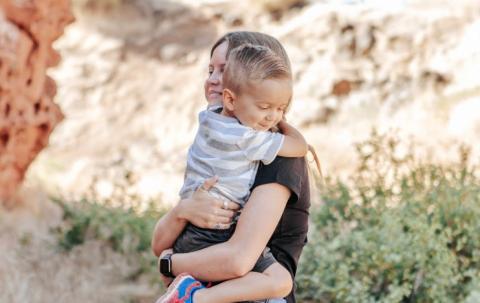 These days, Krew is finished with the clinical trial, and his tumor is completely regressed. He is an active and vibrant little boy. Sierra may have spotted his cancer, but she says that her youngest brother is actually her hero. He plays soccer, loves swimming, the beach and his four-wheeler. He also has 20/25 vision in his left eye – almost perfect.

And while there are now treatment options closer to home, the Dennisons have chosen to keep Krew’s follow-up care at Phoenix Children’s. “Overall, we’ve had such a good experience,” says Jamie. “I know I can reach Dr. Rama whenever I need her, and she and Krew have a tight bond.”

When asked what advice they would give other families facing retinoblastoma, the Dennisons offer these words of wisdom: 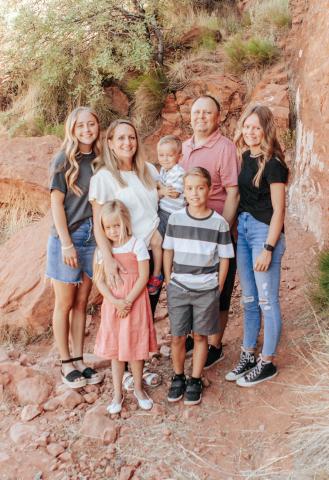 Jamie and Jeremy Dennison spend time outdoors with their five kids – Krew in the center being held by mom.

Dr. Rama also wants families to know that while retinoblastoma is rare, it’s the most common eye cancer in children, affecting around 300 kids each year in the U.S. It’s also highly survivable. When diagnosed and treated early, the survival rate is more than 95 percent.

“Historically, most cases were found during the holidays when families gathered for photos,” explains Dr. Rama. “But smartphones don’t pick up the tumors anymore because of the red-eye deflection.” What can you do instead? Know the Glow. If you see a white light reflected in your child’s pupil, get them screened immediately.

If you suspect your child or one close to you might have retinoblastoma, schedule an appointment at Phoenix Children’s at 602-933-EYES (3937). 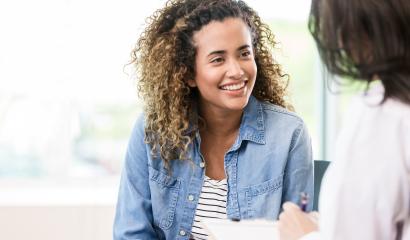 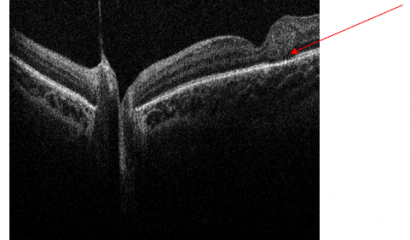