Smiling Despite the Pain 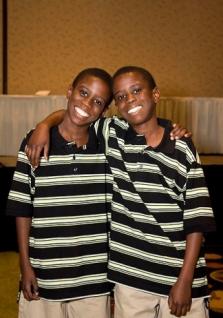 You would never know from their animated personalities and infectious smiles that Jordan and Joshua live every day in pain. The 13-year-old twins not only look, act and sound alike, including finishing each other’s sentences, they were also both diagnosed as babies with sickle cell disease.

Although the hallmark of this chronic disease is constant pain, there are a number of serious and even life-threatening complications that can result from it, including infection and stroke. “It is not just a blood disorder,” explains Francis Eshun, MD, a hematologist at Phoenix Children’s. “The complications affect every system of the body.” While there are treatment options for the pain, and ways to prevent complications if treated in time, there is no cure.

“It has been educational,” says Kristine, the boys’ mother. “There's not a lot of information out there about it.”

That may be in part because of its relative rarity. Sickle cell disease affects between 70,000 to 100,000 people in the U.S. and it affects people of all races, according to the National Institutes of Health. It is an inherited blood disorder where the red blood cells contain an abnormal type of hemoglobin, which causes the cells to become sickle-shaped and reduces blood flow to tissue, causing pain and damage to the tissue. The average lifespan of someone with sickle cell disease ranges from 23 to 43 years.

Fighting Through to Manage Sickle Cell

In addition to their lifestyle changes, Joshua and Jordan take numerous medications to help manage the disease, including antibiotics and medications that help with breathing, depression and pain. “The thing about sickle cell is it's a chronic pain disease,” says Kristine, mother of Joshua and Jordan. “But the number one killer of those with sickle cell is infection.”

Joshua and Jordan have been coming to Phoenix Children’s since they were 5 years old. “Phoenix Children’s is a really nice place. We call it our second house,” Joshua says. "We know they are going to give us the medicines we need and the nurses really help you. I love how they protect us and make sure we are not hurting so we are not at the Hospital for a long time.”

The goal of the Sickle Cell Program, which is part of the Hospital’s Center for Cancer and Blood Disorders, is focused on education and prevention; screening children and adding them to a comprehensive program so complications can be prevented before they arise. “We empower the parents and patients to recognize symptoms. If they can recognize them and get to the hospital on time, these complications can be prevented,” says Dr. Eshun. "The program also screens for stroke risk, the most feared complication of the disease."

Caring and Support Are a Family Affair

The twins have three brothers who support and help watch out for the boys. And even though Joshua and Jordan get extra attention, the other boys are not jealous. “It has made us a stronger family,” says Kristine. They not only have the much-needed support of their entire family, but each other to lean on. “If I was going through this without him, I would be sad and lonely,” says Joshua.

The family works to educate others about the disease. Kristine even started her own foundation to raise awareness and provide support to other families. “We have two family members who have died of it,” says Joshua, who talks about becoming a hematologist someday with a specialty in sickle cell disease.

Jordan says they encourage each other when times get tough. “Whenever the nurses say we have to get another shot or something, Joshua is always there to calm me down. If I had to go through this by myself I wouldn’t be able to make it.”