From Tragedy to Twist of Fate 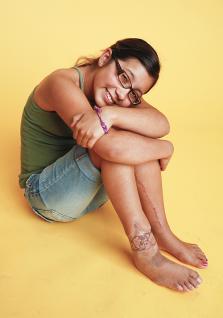 A Family Trip to the Lake

Mia, Will, her mom Angela, her younger sister Anisa, and Ronnie, a family friend, were the first people on the lake that morning. In a split second, the float tube inside the boat caught wind and began to soar out of the boat. As it did, the slack of the rope got tangled around Mia’s right foot. The force of the tube picked up the petite 11-year-old sitting in the middle off the boat, pulled her straight up in the air, over her dad’s head and into the water.

Will dove off the back of the boat after his daughter, but Ronnie, who was driving, got to Mia first. As Mia bobbed in the water, she told her mom that her foot felt weird. Her foot was virtually severed from her leg, attached only by a few tendons.

When Will reached Mia he cradled her in his arms. “I lifted her up and her leg came out of the water with no foot. The foot came out a little later … like a Barbie doll when the foot has snapped off.” Angela was already calling 911 from her cell phone as Will and Ronnie lifted Mia into the boat and began wrapping her leg and foot with towels as they headed back to the shore.

Both Will and Ronnie had basic EMT training. But it was little consolation to them considering the severity of the injury and the fact that they were in – what seemed like – the middle of nowhere and miles from the nearest hospital.

On the Way to the Hospital

Three Maricopa County sheriff’s deputies were the first to arrive. One of them was an EMT and began to stabilize Mia and treat her for shock. Once the helicopter arrived, Mia was airlifted to Maricopa County Medical Center.

The first surgeon to see Mia thought her foot would need to be amputated, but he was more concerned about saving Mia’s life. He called in one of his colleagues to take a look, an orthopedic surgeon, who made the call to Phoenix Children’s looking for Dr. Jozef Zoldos, a Phoenix Children’s plastic and microvascular surgeon, and the only person he thought could save Mia’s foot.

Within 10 minutes, Mia was in an ambulance on her way to the Phoenix Children’s Level I Trauma Center. When they arrived, Angela says 20 to 30 people were waiting for them. “It was amazing, amazing, amazing,” says Angela. “There were doctors, nurses, even the child life staff waiting for us. From the moment we got there, it was like Mia was the only patient.”

The trauma center had only been open for four days, and Mia was the first Level I patient – the most severely injured – and the first to be taken straight to the operating room. “I think it really speaks to the planning of everyone involved with the trauma center,” says Zoldos. “The system was up and running and able to take on an extremely intricate and complicated case right out of the gate.”

Zoldos admits reattaching Mia’s foot was risky, and something many surgeons wouldn’t have attempted. She would need a series of several operations in just a few days, each of them having a limited success rate. “A doctor questions whether or not to put a child through something like that or just amputate,” explains Zoldos.

The First of Many Surgeries

The first step was for Phoenix Children’s orthopedic surgeon, Dr. Greg White, to reattach the bone and rebuild her ankle. Zoldos would then reattach the arteries and veins one by one to reestablish circulation.

Surgeons Zoldos and White worked on Mia for eight hours. It would take a series of four more surgeries over the next 12 days to reconstruct the nerves and transfer ligaments and veins from her left leg to her right. Lastly, Zoldos would need to bridge the gap from Mia’s foot to her leg where skin and muscle had been torn away. This would involve a free tissue transplant where the surgeon removed skin and muscle from Mia’s torso and transferred it to the area between her leg and foot.

Besides the work of the surgeons, Angela says the staff was with Mia every step of the way. “The nurses and child life staff would go out of their way to do stuff for Mia. Our time there was a good as it could possibly be, from the therapy dogs, music therapy, the food in the cafeteria, even the coffee cart that came around each morning. There was never a time when we thought, ‘when can we leave this place."

Mia and her family had prepared themselves for a two to three month stay in the PICU. To everyone’s astonishment, Mia was ready to leave in just two weeks. She would still spend months recovering at home and would need physical therapy. But she was returning home just the way she had left – something no one who saw her foot that day would have predicted.

On the Road to Recovery

Mia has full function of her foot, but has to be careful about not putting too much pressure on it until she regains all of the feeling back – a process that could take a few years while the nerves regain function. She says it “felt weird” to put a shoe on for the first time, and admits that she’s still a little self-conscious about her ankle that doesn’t look completely normal.

But the girl has some serious grit. She recently participated in the 5th Annual Pat's Run in honor of Pat Tillman, and even mustered up the courage to get back on a boat when she went on a field trip to San Diego with her classmates.

But those things were a cakewalk compared to what Mia calls her biggest challenge; finally looking at her foot. More than two months after the injury, her parents convinced her that it was time. As Angela undressed the wounds to give Mia her first peek, Mia says the moment was both the scariest – and the happiest of all. When she saw her foot she began to cry. This time it was tears of joy. “It’s my foot. It’s really my foot!”